For those of you who don’t know me, I’ve been working at the PTO for about 4 years and I started hoteling from St. Louis in November 2011.About three weeks ago I decided I needed to enter a tri for June and help kick off another round of 70.3 training. It was down to the Octomax (500yd, 18mi, 3mi) or the Quartermax (1000yd, 28mi, 6mi) which take place at Innsbrook…a private resort/town/neighborhood about an hour from St. Louis. It’s so private that there are bridges and tunnels under and over the outside roads. I decided to opt for the Octomax since I wasn’t familiar with the course and heard it was hilly.
The bridge over the “main” road 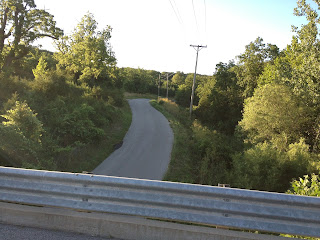 Underneath a tunnel with it’s elevation 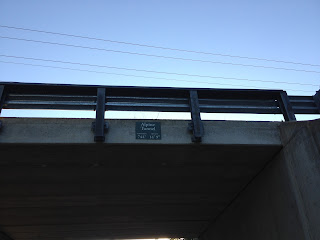 One of the 100 lakes at Innsbrook 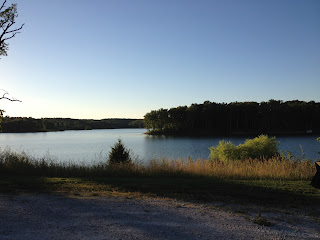 The race story starts on Thursday during the weekly group ride. I normally go with the long ride which is about 25 miles but someone always suggests, at the halfway point, a way to add on a few more miles. Normally I don’t care but this time we rode some extremely steep hills. They were short but it was pretty much impossible to ride them seated. As it turns out this would be a good prelude to Innsbrook.

On Friday I headed out there to pick up my race packet and swim the course for a little while. It’s about an hour drive, even longer in traffic, so I headed out at 3:30 and still hit traffic. There was also another race that weekend, the Max-O-Mania, which consists of 3 race sort of like a mini Triple-T. It was supposed to be a team race but there were only 6 teams and the rest were solo racers. Race 1 was 1000yd swim and 3 mile run, Race 2 was the Quartermax and Race 3 was a TT start 10 mile bike, 500 yd swim and 2 mile run. I sat around and waited for the swim start. 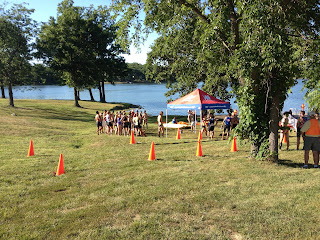 Funny if you read Steve in a Speedo 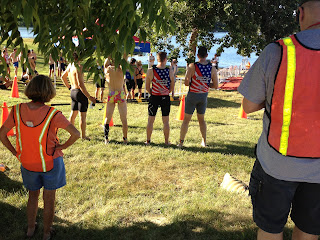 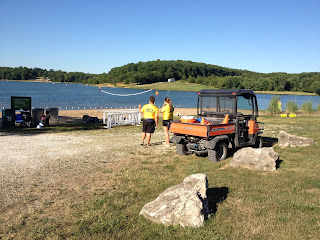 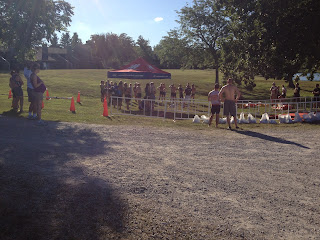 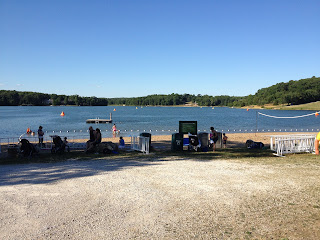 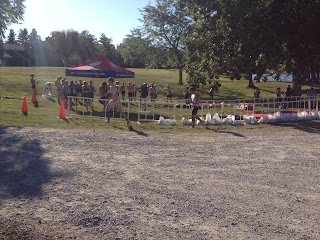 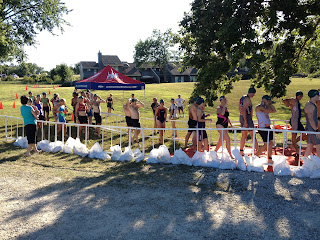 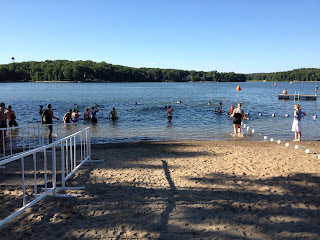 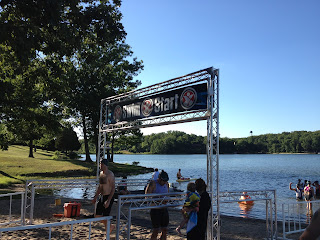 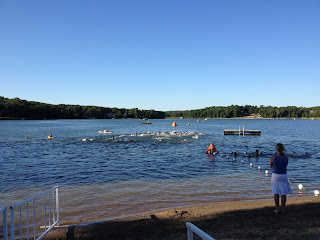 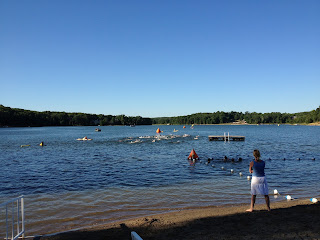 After the swim start it was pretty boring so, I headed out to drive the bike course and check out the hills. The hills aren’t that long they’re just extremely steep and a pain in the ass to get up. They also make for some decently fast downhills which were quickly slowed by a turn or another uphill. Note the hay bales. 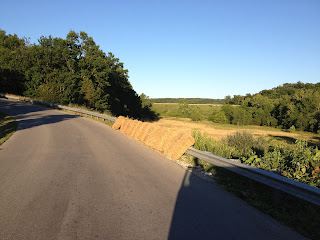 I was wondering why these were there as the hill and turn don’t look that steep/sharp. (The next day I understood why they were there. I considered not slowing on the turn and then quickly realized I would end up in the hay bales if I didn’t. I saw a few people cross the finish line with some big scrapes on their legs)…Then I headed home.

Race morning I woke up at 4:30, took the dog out as the g/f had to work night shift and I’m never sure when she’ll be home in the morning. I debated on what to bring for fluids during the race and got in the car at 5:05. Then I realized I should bring a chair so, I went back and got a camp chair. The race starts at 7:30 but it’s an  hour drive and there is only one entrance to Innsbrook which has a security gate. Every guest needs a pass to drive around and I wasn’t sure how early people would show up and how long I would sit in the line of traffic…Hence the chair in the event I had a lot of time left over. I set up my stuff and sat down for a bit in the STL Tri Club tent. Of course it didn’t take long but there were a lot of people still not parked at 7 and with transition closing at 7:15 this didn’t leave them a lot of time. One girl was still getting her packet at 7:10 and she looked liked they type of girl who is late for everything…probably because she had to put on makeup…seriously, she had lipstick on. 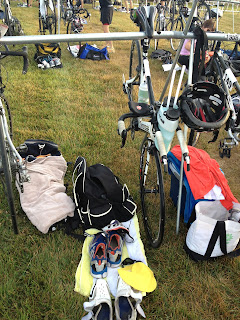 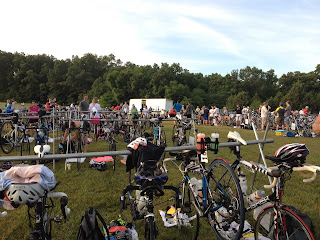 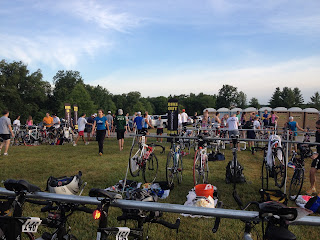 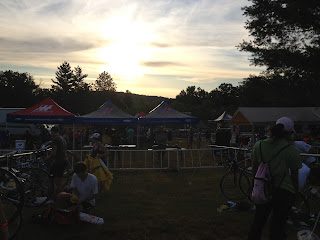 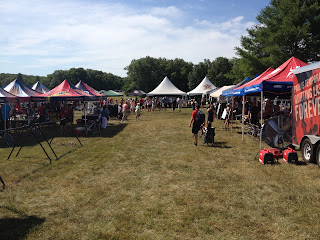 A little before transition closed I headed down to swim a bit. Good thing since the RD likes to make up rules/penalties whenever he feels like it. This time it was a 2 minute penalty for everyone that wasn’t out of the water in 2 minutes. Then, several minutes before the start, it was a 1:30 penalty if you swim on the wrong side of the buoys. He also made up a penalty for passing near the speed bumps on the course. I don’t really care what type of penalties you choose to add to your race but, making them up minutes before the race starts is not the time to do it. Personally I’d like to see a penalty added for passing during a turn, this can get a bit dicey.

Then we got into the little corral on the beach for the start. There was a 30 second warning, no countdown, then a boom that caught everyone by surprise and we all ran into the water. The swim was short but eventful. I successfully drafted 90% of the race, got my legs pounded by some guy’s arms for about 10 strokes, punched said guy in the side when he finally got tired of hitting my legs and got beside me. At 300 yards in we were fairly spread out and I felt there was no need for this. Especially since it couldn’t have been doing much for his stroke. After the punch he tried to swim over me. I wasn’t having this and veered into him. He stopped after that but sat right next to me. At the point I failed to understand WTF he was trying to do. It’s like his goal was to piss someone off during the swim since he didn’t pass me. Who knows…What I do know is that he fell apart on the run and I passed him. I’m a bit unhappy with my swim as I just swam a 400TT in 6:55. Granted that was in a pool but I swim nearly dead straight in open water. Maybe my skirmish in the water cost me some time.

The punchee exiting just in front of me 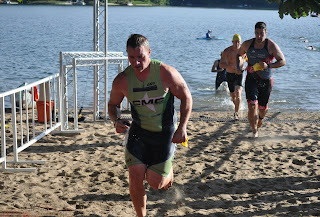 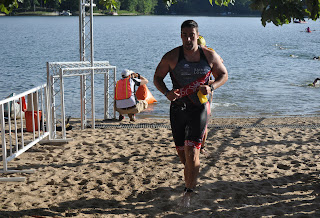 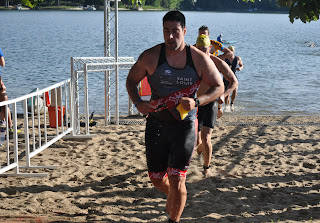 Glad I swam faster than the guy in the bike jersey 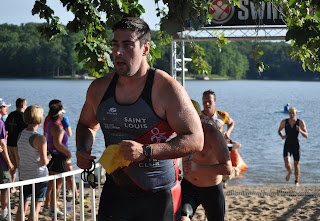 Anyway, out of the water and up the hill about 250 meters to T1. I hate long uphill runs to T1, I need to work on running after swimming. I didn’t bother to clip my shoes in since the mount line was 30 feet from my rack and there was a turn right after the mount line.

The bike was tough, it rolling steep hills for the first 5 miles and my legs couldn’t handle them seated because of the ride on Thursday. Around mile 16, at the last hill, I was cursing “G” for taking us on that route. I told him and he agreed, rather colorfully, that ride was a mistake. It was definitely a quoting Jens Voight type of ride towards the end. (SHUT UP LEGS!) I manged to not hit the hay bales from earlier or the Quartermax racers when we merged back in with them. I passed a few people, got passed by some speedy men and one woman from waves after me. Then I caught up to this 15 year old girl in her USA singlet and I couldn’t figure out how the hell she got in front of me. I passed her and then she passed me on the last climb. Turns out she swam 7:15 and her T1 was about twice as fast as mine. She won her age group…her mom and dad also won their age groups. It was almost laughable as they fit the Type-A triathlon family stereotype to a T when you saw them together. Then it was time for T2. 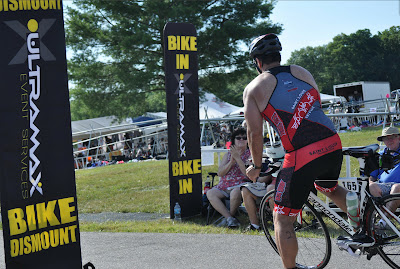 I was lucky that girl did pass me as I would have forgot to get out of my shoes on the bike until I saw her do it. It was a slow transition as I wasn’t looking forward to the first mile uphill. I grabbed some water and heard  “Come on, you can do it!” probably because I was walking. I always think, “yeah, I know I can, this isn’t my first time at the rodeo. DEATH BEFORE DNF!” Maybe not the latter part since it’s a sprint.

Run 28:30 (nice and even)
The 1st mile sucked since it was mostly uphill, then you get a little downhill break but that leads to a steeper uphill. This Aussie passed me (how do I know he was Australian you ask? Mainly because of his accent and he had an Australian tri top on) and said it’s tough running downhill…he recanted during the next uphill. On this hill I was passed by a girl from my tri club, she told me this was her least favorite hill and then went on to win her age group. A few uphills later (the elevation chart is basically a bunch of triangles) I caught my friend from the swim when he started walking. I don’t think he had any idea who I was but wished me luck.

The last half mile or so was downhill and people from later waves started passing me. I kept yelling “run him down!” I didn’t care, they weren’t in my division. I almost coasted across the line. I would have except for this one little 5 foot mound that really slowed everyone down for a few seconds. I crossed the line in 1:37:23. 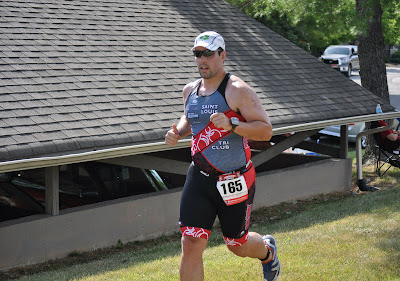 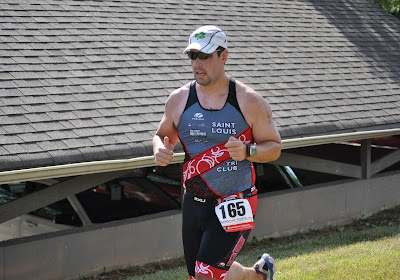 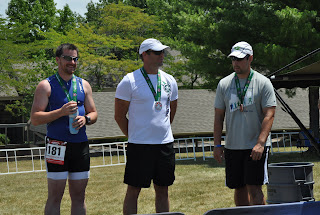 I didn’t have a time goal in mind since it’s such an odd distance. The hills also make it tough to speculate. I raced a good race and had a lot of fun. Then I sat around for 3 hours with the Tri club waiting for my medal 🙂

One thought on “Greetings from St. Louis”