To say that the General Smallwood International Triathlon kicked my butt yesterday is a gross understatement.  I have never done a triathlon, or any sort of race, this time of year.  In fact, the closest race I’ve done has been the DC Tri, which used to be held mid-June.  But this, yesterday, was something else.  The race distances were not the subject of anxiety, just the heat.  All week long, I’d heard it would get up to 100+ degrees on Saturday, and that certainly was the case.  I tried to get myself mentally prepared, but nothing was enough.  I managed to fare ok with the swim and bike, but the run…. the “run” was something else.  It was tougher than any marathon I’ve ever run, and this was only a 10K.  I was seriously suffering heat exhaustion all afternoon and evening after the race, but I’m going to now try to recount the day as best as possible.

We got to the race with plenty of time to spare, and it actually felt less humid in Indian Head, MD than it had in Arlington an hour prior.  Probably because of the woods.  It quickly heated up, though.  As I lined up to get my packet, I was surprised to find out my race number was 24.  Wow, a two-digit number!  I’ve only ever had three- and four-digit numbers; I was sure someone had mistaken me for some elite athlete, haha! 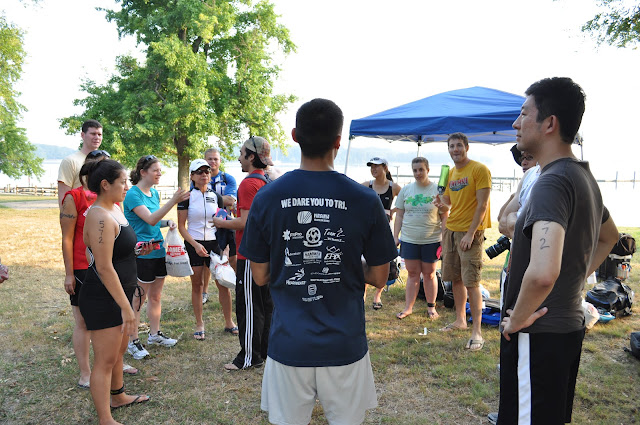 General Smallwood was a small race, just 600 registrants (many of whom I’m sure wimped out because of the heat), so the transition area was easily manageable.  The worst part was that it was on asphalt.  Normally transition areas are on grass, to be a little more amenable to bare feet and spandexed bottoms.  Nevermind the hot pavement, I knew there’d be no way I could run to T1 in bare feet, so I wisely placed my flipflops near the post-swim path.  At this point, though (~7:30am), it wasn’t yet oppressively hot, but I knew the worst was yet to come.

The water was very warm; we’d been told the day before that the water temp was 87° F.  Ugh!  Before the swim, I waded into the water just to get the feel of it and practice a little swimming.  I felt very relaxed, too relaxed, because it was so warm.  Once I actually began the race with my swim wave, it was craziness for the first several minutes as various limbs from various people were going everywhere, but that also made it more fun (less isolating).  Because there were swim waves after me, even though I’m a very slow swimmer, I still had the sensation of swimming with a crowd the whole time.  Not only was the water temperature difficult to handle, but also the water contents.  I mean, people complain about the Potomac being gross (the ones who complain the loudest are the ones who have never swam in it), but that water is essentially free of debris.  Maybe an occasional leaf, but that’s it.  This water at General Smallwood, however, was full of weeds, or something.  All I know is that they kept getting tangled all around my body and it was very annoying.  But at least there were no jellyfish (or other animals) and it wasn’t salt water.  In typical fashion, I swallowed lots of water and thus exacerbated stomach cramps for the remainder of the race.

In typical fashion, I swallowed lots of water, hence the onset of severe stomach cramps. This water was MUCH grosser than the Potomac!!! 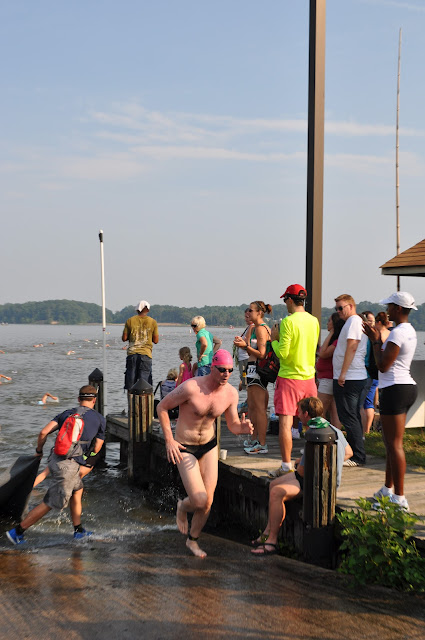 It felt good to finally get out of the water and head towards the bike portion.  Because I now have a fancy new Garmin watch, I could see all kinds of stats.  But I’m not too knowledgeable about all that stuff yet, so I basically just saw 1) distance covered and 2) average speed per lap (set at five miles).  The first 20 miles were ok, but during the last 4-5 I was feeling the heat and just wanted to be done with the bike.  Little did I know that something MUCH worse was yet to come.  But before delving into that, more about the bike.  I thankfully did not get a flat- I saw several people who’d had to stop at various points to fix a flat.  (I had decided to get some practice the day, since my current race bike (Specialized Ruby) has luckily never gotten a flat.  Twice on Friday, I managed to pinch the tube and make it explode while inflating my tire.  Great.  I should never be called upon to fix a flat.)  As for the course itself, it wasn’t too bad at all.  There were some hills, but nothing very steep that required my small front gear.  Because I have this super-cool Garmin, I was able to focus my attention on that, at times, instead of blanking out due to monotony.  It was nice to see that sometimes my average speed got well about 20 mph, but it also got to more humble values as well.  That’s ok; it was just good to have some data so that my coach can hopefully make heads or tails of it, because I certainly can’t!  As I was finishing my bike portion, I saw several people on the run part, except nearly all of them were walking!  What’s up with that??? I thought.  I was so sure I’d be flying by those slackers.  Little did I know, oh boy….

Finishing up the bike portion and getting ready for what would be the most grueling run of my life. No exaggeration.

My legs were already sore from the swim and bike, but I started the run with what I thought was a good effort.  I had my water bottle in hand (filled with what had become really grossly hot water), but then quickly realized this portion was not going to be all fun and games.  Now, normally I love running, but running in this type of weather was something else.  Like I said, toughest run of my life, and there was certainly a lot of walking.  I had already planned on a 4/1 run/walk ratio, and figured that would be conservative, but I quickly found that I needed to walk a lot more.  And I wasn’t the only one doing so.  I can’t remember ever feeling so horrible during a run- massive stomach cramps, dehydration, my heart beating like crazy, feeling like my body was going to explode from overheating.  The aid stations were few and far between.  And very small!  Knowing the obscene weather forecasted for today, it would have been great if the race organizers had set up a few more aid stations.  At the few that I passed, my recollections are: having cups of ice water dumped on me, pouring cups of water on my body, throwing cups of water or HEED into my mouth, and I literally mean throw.  I doubt the cup would even make contact with my lips; I just knew that I needed the cold liquid in that cup to go in my mouth instantly.  And that water bottle I was carrying?  Yeah, that water was disgustingly hot, so I couldn’t even finish that.  I did take a CLif Shot gel halfway through, hoping it would help, but I’m not really sure if it did.  I think the second half was easier than the first (slightly) because there was a lot of shade, there was more downhill, and the last couple miles were off the road and on a dirt trail through the woods.  THAT was such a reprieve!!!  Still, it was tough and I noticed I was setting records for slowest miles ever.  One of them was over 12 minutes/mile, yeesh!  At least I was able to ploddingly jog my way in the last stretch towards the finish line, pretending that I was totally ok.  The clock at the finish line said 3:42 and some odd seconds- OMG, that is, by far, my slowest Olympic tri finishing time!

Darn that heel strike! At least I still look alive in this photo 🙂 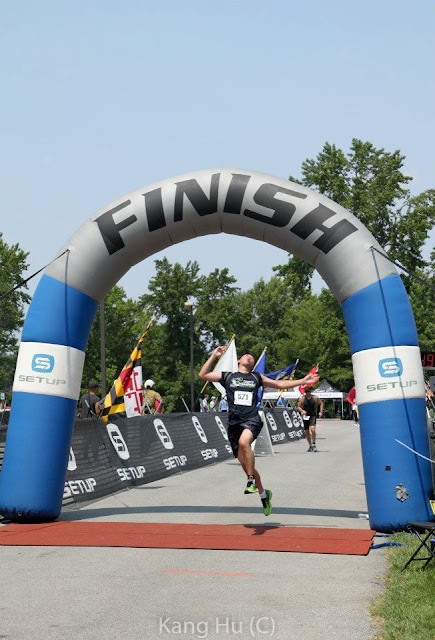 SO HAPPY TO FINISH! (Yin Tsai)

At the end of the race, I didn’t feel any better.  My stomach hurt massively, I was lightheaded, very dehydrated, but I couldn’t eat or drink anything because of the stomach cramps, I was tired, extremely hot, and I’m pretty sure there were goosebumps and definitely tears as well.  So I guess I was in shock and/or suffering from heat exhaustion.  By the time I finally got home, I didn’t feel any better, and couldn’t put on a brave face for my parents, who’re visiting this weekend.  My mom took one look at me and said that I had heat exhaustion.  Who am I to disagree?  It’s Sunday morning now, and I’m finally starting to feel a little better.  Today is still a much-needed day off, and I suspect I won’t be up for hitting the pool tomorrow.  I still have no appetite, but managed to eat a plum.  And I lost four pounds between yesterday morning and this morning- that definitely isn’t healthy.

I really need to figure out the cause of these massive stomach cramps.  Do I need to eat a different type of pre-race breakfast?  Am I just swallowing too much water during the swim?  Should I take electrolyte or anti-cramp pills, or something else, before the race?  My stomach pains are my biggest post-race issue, whether it’s a triathlon or a marathon.  It takes until sometime the next day for things to start settling down and I feel like I lose whatever tone I had.  Rather than just focusing on training, I’m going to make this- figuring out how to prevent stomach pains- a top priority.  I can’t let days be wasted by feeling like garbage.  Here’s hoping the Luray Internation Triathlon will be much better!

So according to my Garmin, here are my numbers.  And before you judge, remember that the heat index was well over 100 degrees:

I never again want to subject myself to racing when it’s hotter than Hades, NEVER!

I managed to put on a victory smile as members of the PTO Tri Club hijacked the podium!
But I should add that I wasn’t the only person from the PTO Tri Club competing in this race.  Far from it, actually.  Since General Smallwood was a club race, there were several PTO Tri Clubbers competing, some solo, and some relay.
Our relay teams kicked some serious butt, with “The Abusement Park”, composed of Justin Mullen on the swim, Alex Vu on the bike, and John Williams on the run, winning FIRST PLACE in the relay division- congrats!!!!

Here’s a run-down of my awesome fellow PTO rockstars:

P.S. Now that I’ve fully recovered from the race, I’ve already decided I’m going to do it again next year!!  Isn’t that a little sick and twisted?  :p

Be sure to check out more pics in our Facebook Group!